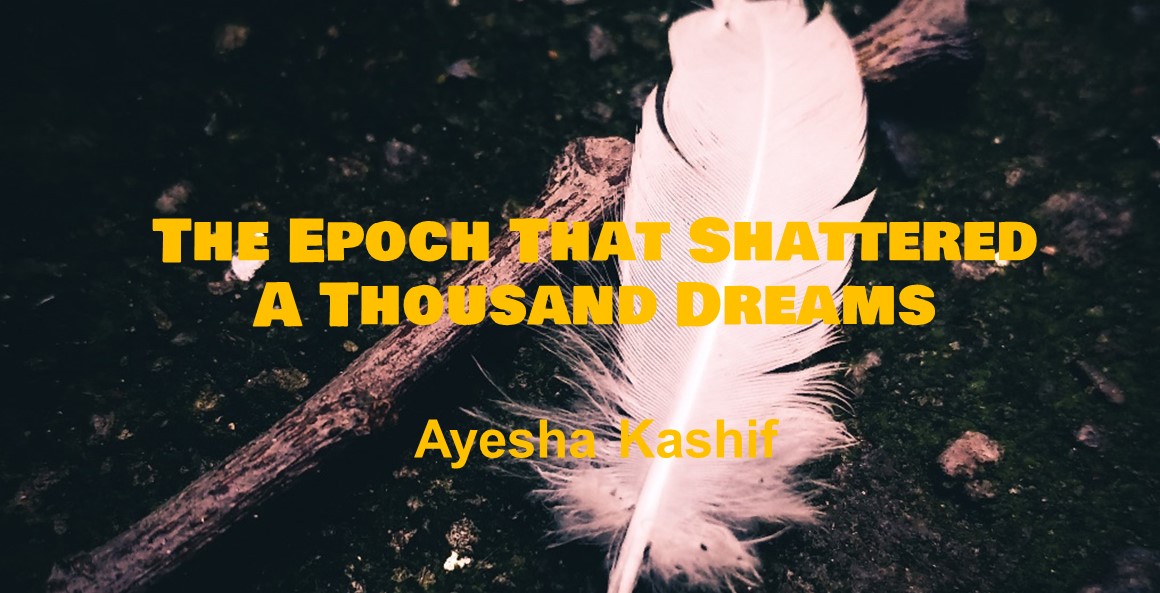 The hearts beating fast. The jolts and the fear. The smoke and the screams. The silent prayer. The hope. The courage. The faith. The pain. The want. The wish. The yearn. The flame. The father holding onto his son. The mother hugging her little one. The fall, the plunge, the plummet, the drop. The cries out loud to make it stop. The horrified looks on pale faces. The calm of unmoving bodies, the heartfelt embraces. The life seeping out, excruciatingly slow. The wife at home, now made a widow. The hope that his cousin is still alive; the tears dried up, the aggrieved sighs. The dead ones lying, unidentified. The relatives summoned to their bedsides. The cameras, the onlookers, the interviews. The world that will move on and come through. The non-beating hearts of the deceased. The trust of the loved ones that’s now decreased. This dark time that brought no good. Such unfortunate occurrences nothing but deadwood.

Eid was nearing but they were not out shopping. The man was willing to work but he had no job. Their kids were bored but they had not gone out to play. They thought they would be safe at home. Safe from the virus. That is what they had been told.

She was working in the kitchen while her husband was checking the bills, a worried crease on his forehead. The kids sat in a corner, playing charades, anxious not to disturb their nowadays short-tempered father.

For half an hour or so they stayed in the same place, until the Earth shook. Until they could hear high-pitched screams. Until they could see smoke billowing in front of their window. Until the ceiling gave in. Until the world caved in upon those four figures, huddled together, silent tears streaming down their cheeks, unsaid prayers left lingering on their lips. For them, it was the end…they were there no more.

They did not deserve to die. They deserved to live, to grow, to be happy, to enjoy the pleasures of life. But they were killed, innocent beings caught up in a world of cruel hearts and evil deeds.

Something was wrong. She could feel it. Something was not right. Her heart was beating fast and so, she, a mere eight-year-old began reciting all the prayers her parents had taught her. Her mother looked at her and smiled caressing her cheek. Her father sat in the row opposite but she could not catch his eye. His head was hunched and he was staring fixedly at a spot on the seat in front.

A female voice echoed around them but she did not understand what was being said. Her mother tensed beside her and so she dared ask:

Her mother told her that they were landing. She sighed in relief and felt the plane plummet downwards. She felt funny in her stomach so she pressed her tummy and bit her lip. And then suddenly, suddenly, they were soaring upward again. Looking out of the window she saw red-orange flames liking the tail of the jet she sat in. Just as she was about to show the fire to her mother, she was jerked out of her seat. Her nose hit something hard and began to bleed. And then, she was falling, falling, falling; the pain was ebbing away and she could not feel her mother’s sweaty hand grip hers anymore.

You cannot evade Death. You can only repent and ask for forgiveness. You can only be grateful and good. The wrath of God is cascading upon us, wearing a different mask each time. You can just hold on and pray. You cannot fight what is to come. Reflect upon what you did wrong and try to change yourself.

“And We will surely test you with something of fear and hunger and a loss of wealth and lives and fruits, but give good tidings to the patient Who, when disaster strikes them, say, indeed we belong to Allah, and indeed to Him we will return.” (02:156-157)

There are some stories that touch you—some stories that are true. That reach inside you and wrench your heart out. There are stories about people you do not know. But you still feel the loss, you are still pained. Because we are tied to each other by the green and white of our flag, by the crescent and the star of our faith, by a common brotherhood that links us together. And we feel the loss, we ache. We want to scream out loud, we want to vent out our feelings, we want people to understand, to stop hurting others. We want the wrongdoers to be punished. But we can’t because we are slaves of our own selves. So instead we write. And we spread the message.